Cash-strapped State of Illinois plans to sink another $2.3 million into a project at its largely-vacant airport — Mid-America St. Louis Airport — near downstate Mascoutah.

The state will give Chicago-based Boeing the cash to allow the aero-space manufacturing giant to set up shop at the 12-year old airport that has seen so little use during its tenure that from outer space it must resemble a giant paper weight.

The taxpayers of St. Clair County which have been footing bill to keep the airport open, as well as providing millions of dollars in incentives to spur air traffic, will also contribute $3.5 million to turn the unused cargo terminal into use for Boeing's defense program, employing about 75 people.

The lease has not been finalized with Boeing, but the St. Clair County Board has already approved its portion of the up-front cash. Boeing is expected to lease the facility and repay the investment over the next ten years as it opens a $7 million manufacturing plant.

County Board Chairman Mark Kern told the Belleville News Democrat that the board was comfortable that a company of the stature of Boeing has made a commitment to the area, and that they look forward to working with them.

Others, especially the taxpayers of St. Clair County, are a little more skeptical as evidenced by the more than three dozen comments that follow the online version of the story .

Thursday, a cargo jet from China landed at Mid-America in a test run that could result in long-term cargo service from the East. The landing was considered a success. The plane's cargo shipment off-loaded onto trucks bound for cities throughout the country.

Mid-America St. Louis has also become a U.S. Port of Entry to accommodate a customer that imports flowers and other perishables from South America. The county spent $3 million to outfit a cargo terminal with refrigeration.

The board is considering building another warehouse.

Competition across the river

In Missouri U.S. Sens. Claire McCaskill, D-MO and Christopher "Kit" Bond, R-MO are part of a delegation enroute to Beijing in an attempt to secure cargo opportunities between China and St. Louis' Lambert Field.


I can still remember my first full time job as a checkout clerk at a grocery store. I worked at National Tea Company. I remember what some of those prices were. Sometimes while stocking up on groceries today, I have a flashback of the prices and wonder whatever happened to them? A gallon of whole milk cost $1.29; a jar of baby food was $.19; and a loaf of bread was $.29.

Those were the days. As an employee back then we had to do the math ourselves, counting out change to our customers. We were also taught that when making change, coins were placed into the customer's hand first, with paper money on top. Only then did we distribute the proper number of S & H green stamps. Remember those?

One of my pet peeves today is that such retail etiquette has disappeared. How many times have you had your change roll off the top of crinkled, unkempt dollar bills and onto the floor or under your car at a drive through?

But that little annoyance pales in comparison to how upsetting it is that the cost of food has risen so dramatically.

When my children were little, I really struggled. I carried a calculator and added costs as I went. I didn't want to be embarrassed at the checkout by having too little cash. Whatever happened to cash anyway? On the days that I forgot my calculator, I got by with estimating about $1 per food item, not counting meat. Today, that estimate falls far short. Practically nothing costs under $1.

So why does food cost so much more today? I suspect one of the reasons is to pay for all the advertising that is done. Commercials on television every few minutes has to be expensive.

I have an idea — STOP! Advertising is annoying. It doesn't teach us anything. It only tries to coerce us into buying a particular item, much like a con game. Advertising has destroyed our national pasttime, television viewing. But it also infiltrates every aspect of our lives. Cut advertising and lower our food prices. That would make me really happy.

Posted by Carol Henrichs at 3:15 PM No comments: 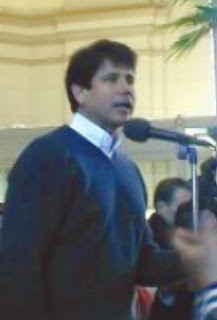 Posted by Carol Henrichs at 9:22 AM No comments: