The road to Peotone along a path of corruption 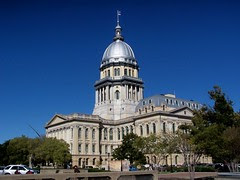 State of Illinois officials are enthusiastic about building the Illiana Expressway.

It is often referred as the road to Peotone, the ill-fated 1968-to-present proposal to build a new airport south of Chicago, and with good reason. At one time, the State of Illinois, Department of Transportation identified the road, now called the Illiana Expressway, as the northernmost access road to the Peotone Airport. Though it was considered by the Illinois State Toll Highway Authority as the southernmost leg of Interstate 355, that portion was considered to be part of the airport project.

After watching several Illinois legislatures and governors botch the decision-making process favors its corrupt pay-to-play system during the 1980's and '90's, the Illiana project may come to fruition. If it does, of the three proposed routes, I predict the one chosen will ultimately mirror the one drawn onto maps of the South Suburban Airport (SSA) decades ago.

For the record, I dislike calling the project the South Suburban Airport. Its location is rural, far from the south suburbs. The name falsely paints a picture of prosperity for some of the most beleaguered towns in Illinois. To believe that a one-runway and terminal building 40 miles south of Chicago will benefit or even affect the south suburbs is akin to believing in the tooth fairy.

I believe the airport is dead and never had a chance of success, and that the Illiana Expressway is the state's fall-back position. Supporters of concrete and asphalt who thrive on decimating farm fields and small towns can probably learn to be content with a ribbon of pavement rather than the huge paved square they had hoped for. After all, politics is the art of compromise.

That doesn't mean they won't continue to try. The Peotone Airport is written into every report and drawn on every map at the local, state, and federal levels. Government can be diligent when it comes to rubber stamping their desires onto as many documents as they can create. The Peotone proposition is as prolific as the writing on bathroom walls. For anyone who thinks the state has gone on to other things, they may be surprised to learn that it still dominates the development-at-all-cost discussions in planning meetings, board rooms, and on legislative agendas. Illinois Department of Transportation officials are always looking for new ways to try to sell their pet project. That is difficult when the project has been around as long as Ziploc bags and Pringles potato chips.

For some odd reason, the politicos in Illinois refuse to let go of this dinosaur. Perhaps their habitual hanging on has gone on so long that they just don't know how to let go, despite numerous opportunities to do the right thing; walk away from the project. There have been ways to heroically turn toward other things—tend to more necessary projects—and at the same time, keep their politics in-tact. But they have refused to do it.

The players have seemingly changed over the many years, but the difference is indiscernible. A governor here, a congressman there; they are all cut from the same expensive cloth borne out of a culture of greed and corruption.

My biggest disappointment is that the power really does lie with the people who have the ability to cut them off at the voting booth. Yet, too few have bothered to get involved, educate themselves, and/or make the connection to what is wrong and who is making decisions.

One of those who did bother to get involved was John Walliser, a homebuilder from Lockport Township. He was one of the victims of the state's desire to build Interstate 355 who saw his house demolished despite the fact that it never was in the path of the tollway. He was largely responsible for the 1996 court order that halted construction of the road builders until the state complied with federal law.

In the following file, Walliser details the story of I-355 and the state's corrupt officials. He names names of the government officials involved in the state's endemic corruption, with a focus on Sen. Roland Burris, as Illinois Attorney General. Walliser shows that Burris manipulated the state's culture of pay-to-play corruption for his own benefit.

Walliser discusses the laws that were meant to safeguard the public but don't. Entitled The Long and Winding Road to Peotone , Walliser connects the I-355 debacle to the state's wrongful attempts to acquire property for an airport that is neither approved nor imminent. His compelling arguments cannot be ignored.

Posted by Carol Henrichs at 3:31 PM No comments: