Despite flaws in the system like too much cash, voting is what is important. Be an informed voter! 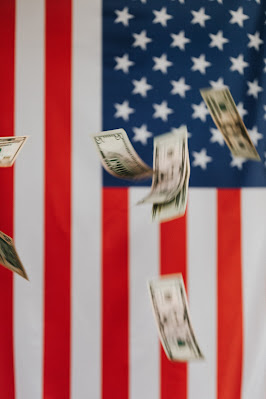 I can't wait to vote for a candidate--and I don't care what party he/she belongs to--I am looking for someone who needs to point out the complete insanity of spending hundreds of millions of dollars to get elected to public office.

Money should not be the incentive for public service. Holding public office is not a get rich scheme, or at least it shouldn't be.

Why do people have so little faith in government?

Look at the obscene amount of money that is spent every election season. Look at the number of millionaires that make up the U.S. Congress. Money in politics is almost cartoonish! At least it would be if it wasn't so tragic. And, it harms us all! The first priority for public officials should be getting money out of our political process. We need more than lip service. We need reform!

Since I claim to be a lifelong Democrat based on policies, substance, and philosophy, I can assure you that it is not because I enjoy the countless emails, phone calls, and advertisements asking for money I don't have. It is infuriating that candidates require any more from me than my voice or my vote.

In these difficult days when corporations pay zero in taxes, the middle class is disappearing, people beg in the streets, and children go hungry, it is obscene to allow so much money to be wasted to win favor of potential voters. Do we really want to select leadership by awarding it to the highest bidder? The process to elect leaders who represent us in this Republic needs to be fair. Citizens United needs to be abolished.

We all need to pay our fair share in taxes because taxes support government services that are used by all. Taxes should not be favors for friends, family, and campaign donors.

Nor should religious institutions be exempt from taxes beyond its normal charitable functions. Religious institutions have proven they cannot be trusted to keep their beliefs out of policy-making. That is not what our founding fathers intended as they proposed a strong separation between church and state. Corruption occurs when blurring that line. If churches want to be a business rather than a charity, they too should pay taxes. Simply advancing religion should not be a reason for tax exemption.

Health care should not bankrupt people. Perhaps some of those campaign billions could be diverted toward making health care affordable for everyone. People are living longer because of the advancements in medicine. That is good, but when so many seniors have to choose over their pharmaceuticals or food on the table, there is a big problem.

Health care decisions should not be made by insurance companies.

Cannabis, a naturally-grown herb which has proven to have health benefits and been used by humans for eons should not be illegal.

Women need to make their own medical care decisions. The idea that politicians decide what is best for women and their families is unthinkable.

Voting is the ONLY option we the people have to turn things around. It will not happen in one, two, or three election cycles, but we voters must be diligent. We have to do better. We have to be informed. It isn't enough to follow the loudest voices, especially in today's climate where lies are treated as truth for the gullible and easily swayed.

We the people must all do our homework, at the local, state, and federal level. It is vitally important. We are electing people that affect every aspect of our lives. We must read and judiciously study the candidates. We must watch how incumbent politicians vote on all issues. We need to educate ourselves. With 24-hour news and access to every speech, every debate, every aspect of a candidate's record, we must ensure that we know who we are rewarding with our precious vote. Voting is our link to the democratic system. And it is vitally important.

Democracy will only work when we the people participate. We can only participate if we are informed. Change will come, but it has to come from us. We are the foundation of our democracy. The elected officials merely represent us. These people are not elite, regal, or royal. They are PUBLIC SERVANTS.

We need to elect leaders who will truly represent the peoples' interests and not their own. Money should have little to do with it.

Change begins now. We must all be a part of it.

Posted by Carol Henrichs at 1:59 PM No comments: