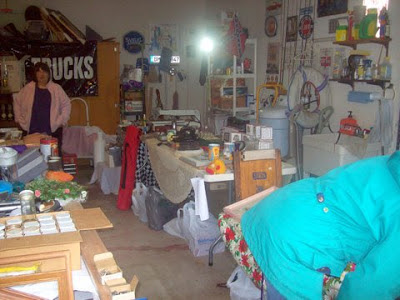 Last weekend, we had a garage sale. That's me in the background, overseeing the 'stuff' in our garage.

It was an extravaganza, but not just because of the usual garage sale activity, but because my husband's two sisters joined us. Betty lives right around the corner from us. Thank goodness, because she and her husband John brought lots of goodies to sell, not to mention their own tables and even a crock pot filled with sloppy joes to eat.

Jean lives in Indiana. She packed up a rental car and drove some 600 miles just to partake.

Family garage sales have always been a good time for us. Not only do we get rid of extra 'stuff' around the house, often times to one another, but we get to visit with each other and socialize with those who come to visit. And, we even made a few bucks.

This weekend was no exception. It was really fun to get together. It had been quite some time since we were all together in one place. In fact, it was during our last family garage sale, several years ago. Only that time, brother Steve was also here. We missed him this time.

I recall the first time we did this. It was just after we lost my mother-in-law, one of the saddest days I've ever known in my life. Betty and Jean lost their mom, and it was a stressful time for all of us. I adored my mother-in-law and felt her loss almost as deeply as they did.

Dividing a household can be a time of great stress. It has also been known to cause bickering among siblings as mementos and precious items are divided among those who are left. That didn't happen with us. Mom was so organized. She wrote the names on the backs of pictures, for instance, that she wanted each of her children to have. She knew who cared about what because she paid such close attention to those details. She listened when we talked. She pretty much got it right too. We knew how hard it would be to sell those pieces of her life that meant so much to us. There were no fights among us--no animosity, jealousy, or pettiness. We pretty much agreed on everything. There were plenty of tears along the way, but the three of us girls along with our husbands, all named John, by the way, made the most of a bad situation. We had a pajama party of sorts at Mom's house for the last time, as we priced items long into the night.

I'll never forget how hard it was to watch someone carry away the dining room table that had held so many happy family memories. It was indeed hard. But we tried to make the most of it. We convinced ourselves that a new family would make their own family memories, just as we had. We ended up laughing about one thing or another as the memories kept us going.

I think that experience, which was overall a positive one cemented our friendships and strengthened the bonds of our family ties. I suspect that is why we enjoy our family garage sales so much.

It is always good to whittle away the excesses. There is no pain associated with it now. There is only joy; joy at being together, not to mention the joy of cleaning out the clutter.

It was an exhausting weekend, but one I wouldn't trade for anything.