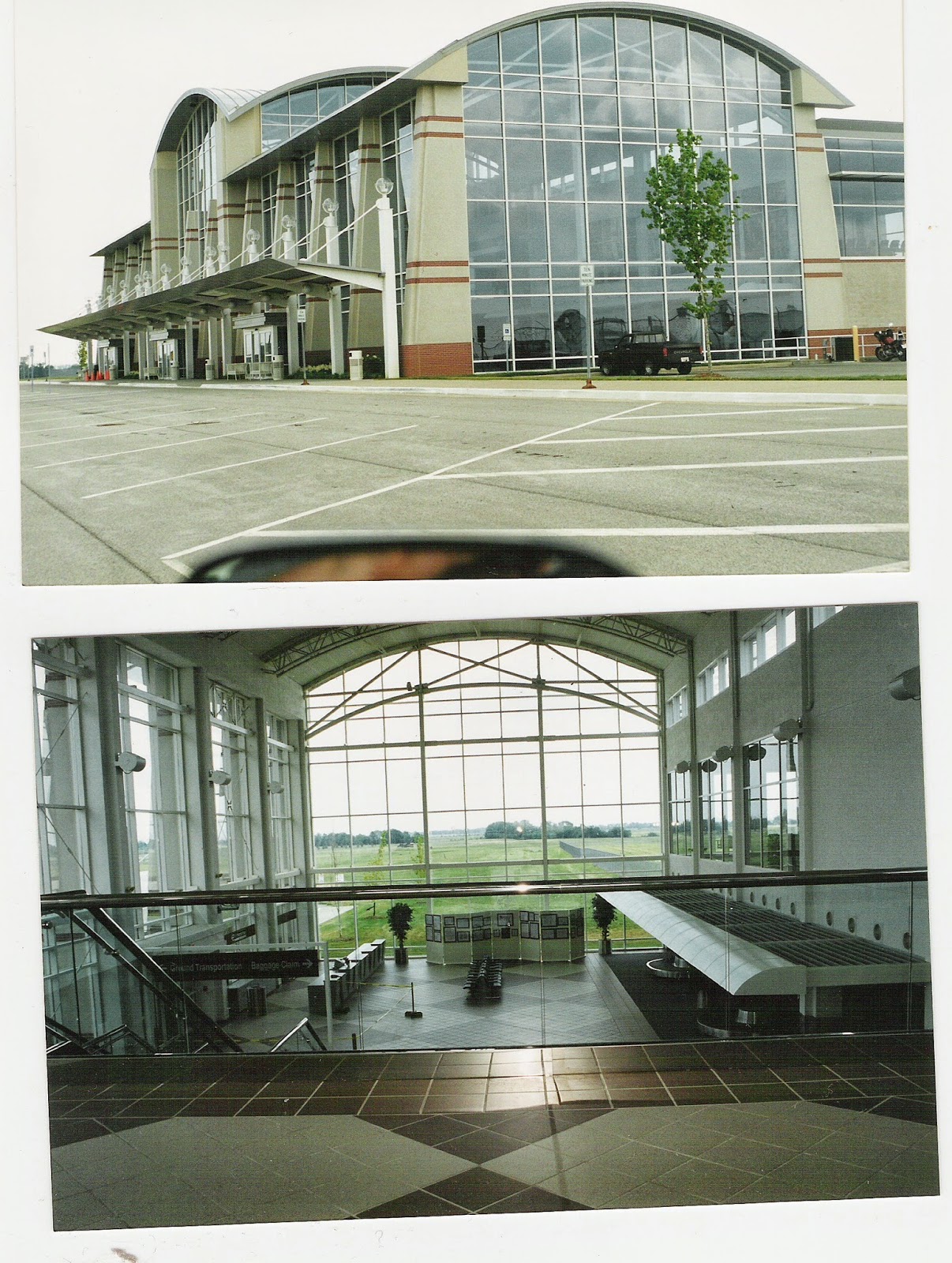 Last week, the MidAmerica St. Louis Airport in downstate St. Clair County was showcased on the NBC Nightly News with Brian Williams. For the third time since it was built, MidAmerica

was featured on "The Fleecing of America," a news segment meant to highlight wasteful government spending.Called the glass palace on the prairie, MidAmerica St. Louis Airport, as it is now being called, is visible from miles away, as it rises above the flat land of Mississippi River country.

Twelve years after it opened, there has been some use, but nothing like the glowing predictions that sold a sleepy southern Illinois community. MidAmerica St. Louis remains largely empty.

The modern, two-story glass and steel terminal is impressive. But don't look for a place to buy a ticket to any destination. Not only are there no ticket agents, no tickets, but neither are there any destinations. The baggage conveyor is idle, void of luggage. Restrooms are spotless, virtually unused. The terrazo floors still shine like the day they were installed.

There are occasional aircraft on the runway, mostly military planes destined for the adjacent Scott Air Force Base. But if Illinois officials envisioned a "build it and they will come" scenario, it didn't work here. Few came. And those who did didn't stay.MidAmerica was billed as a reliever airport for Lambert-St. Louis International, just across the river in Missouri.

When proposed MidAmerica was estimated to cost $220 million.

It was to bring economic prosperity to southern Illinois and eastern Missouri by employing 600 people during its first year. Passenger predictions from the day forecast that 1.1 million passengers would be served by MidAmerica by the year 2000. But in actuality, the cost was approximately $307.5 million. And there were ancillary costs as well, such as the 8.6-mile extension of the MetroLink light rail system from Belleville Area Community College to MidAmerica that cost $88 million.

In January' 98, Tom Brokaw of the NBC Nightly News highlighted the MidAmerica Airport in his "Fleecing of America" feature for the first time. Brokaw called the airport the “Gateway to Nowhere.”

Finally, in the spring of 1998, MidAmerica got its first paying customer. Langa Air, an aircraft fueling and maintenance company began a small operation there, but it was short-lived. The company later relocated back to Lambert International at St. Louis. By summer, three Trans World Airlines jets had landed at MidAmerica bringing about $80 in landing fees each time. MidAmerica was the alternative during bad weather for TWA traffic. Lambert was its hub. But that arrangement ended when TWA was acquired by American Airlines in 2001.

In September, of ‘98, after learning that Lambert was planning a $2.6 million expansion program, State Rep. Tom Holbrook, D-Belleville, a member of the General Assembly filed a complaint with the FAA. He had hoped to block the expansion, by stating that MidAmerica should be used to relieve air traffic congestion.
Other legislators came on board. Holbrook’s actions were applauded by the residents of Missouri who opposed the expansion. They would be most affected by additional air traffic.

Ironically, despite MidAmerica being touted by then Gov. Jim Edgar in previous years, he was said to favored the expansion of Lambert. He said MidAmerica was meant as a reliever for Lambert, not a replacement.

The next month, the expansion was approved. It was billed as the largest public works project in St. Louis’ history.

Expenses continue to climb
As MidAmerica celebrated its first birthday, it had seen about 3,000 take-offs and landings, though most of those were military planes. There was little fanfare.

In the summer of '99 ex-Gov. George Ryan signed a bill to create an enterprise zone around MidAmerica Airport and to offer tax breaks to companies that would move to the area and to create jobs.

Even without regular business at the airfield, the costs for Mid America continued to rise. There was a request for $2.5 million in improvements for 2000. They included a fence to keep deer off the runway, and about $50,000 to replace runway lights, which were too short to meet federal requirements.

Local taxpayers would pay $756,000; the state contributed $852,000 with the balance paid by the federal government.

The annual operating budget at MidAmerica was $2.2 million. In 1999 it was increased to $3.4 million, with a million for salaries of security guards, maintenance workers, managers and other personnel. Part of that expense included marketing costs of $161,000 to four companies.

Today, operating costs have risen to $4.7 million and includes 14 full time and two part time employees. That includes a director, assistant, and workers in resources, operations, planning and engineering, maintenance, and ground services. The budget is overseen by the St. Clair County Public Building Commission.

In August, 2000 a restructured Pan American Airlines began flying out of MidAmerica. Its first flight, Aug. 16, was to the Gary/Chicago International Airport. But as luck would have it, the return trip, that was supposed to be 45 minutes long, was delayed. The pilot was forced into a holding pattern for five hours and was later directed to land at Lambert in St. Louis.

Three months after September 11, 2001 Pan Am suspended its flights at MidAmerica and soon thereafter closed up shop for good.

For a time, charter flights were offered to the Caribbean. But that didn't last long either.
Little changed at MidAmerica until June 2005. Eight years after it opened, MidAmerica celebrated its 10,000th passenger. That was about 980,000 passengers shy of the predicted goal expected five years earlier in 2000.

Then Allegiant Air took flight each week to Las Vegas and Orlando, Fl. airport supporters remained optimistic. Then Allegiant Air cut its Florida business because it was unable to compete with the low fairs offered by Southwest Airlines at Lambert.

Even the longtime St. Clair County board member Craig Hubbard, R-O'Fallon, admitted that building the airport may not have been a good idea.

Acknowledging that MidAmerica never achieved its goals, he said he doubts he would do it all over again, if given the chance.

Michael Boyd, a longtime Colorado-based aviation consultant warned officials about the potential for MidAmerica twelve years ago. He feared it would not be successful.
Supporters are now interested in turning the airport into a cargo facility. They think that idea could turn things around at MidAmerica.

They point to weekly flights that began in 2008 to import flowers from South America.
Boyd recently told them there is nothing to turn around, because they have built something that simply isn’t needed.

MidAmerica has never even approached the inflated expectations of its aggressive marketing campaign.

To people in eastern Will County, the MidAmerica saga and the state's proposal to build another airport in the farm fields near Peotone are eerily similar, even down to the cast of characters who have used the same playbook.

IDOT's consultant, TAMS, was responsible for both projects' highly-criticized pie-in-the-sky projections of users, operations, enplanements and job creation. Both projects were started by Gov. Jim Edgar. One project came to fruition under his administration while the other still has not. But there may be a second chance since Edgar's chief of staff, Kirk Dillard, who helped his boss do some of the political heavy lifting in those days, happens to be running for governor in the Republican primary.

But the biggest commonality between MidAmerica and the proposed Peotone project is how they both have bled Illinois taxpayers.

Many claim that Peotone would be just another MidAmerica

Critics of Peotone issue the reminder from a 19th century philosopher, "Those who cannot learn from history are doomed to repeat it."

Posted by Carol Henrichs at 9:55 AM No comments: