Every day the politics of this country become more and more inane. I think it is time I begin writing about it, because even if no one else ever reads what I write, I will have the satisfaction of purging some of the raging feelings politics in 2015.

Just one Hillary Clinton criticism
So much negativity is being said about Hillary Clinton, even from people who have and should support her. I believe it is time for a woman to occupy the White House. Hillary is the woman who can get it done because becoming President of the United States isn't a walk in the park. It takes experience, tenacity, intellect, and so much more, including guts. It has been interesting to watch the evolution of Hillary since her early days as First Lady. She has matured into a power house of knowledge about the world, the government, the voters, and above all her opponents. She has come a long way from baking cookies in the White House kitchen just to prove a point, to the politically-savvy woman she is today. Hillary is qualified to be the Commander and Chief of this country for many reasons, but most of all, because she's been through the fire and come out the other side. She is stronger, smarter, and more able to fend off her foes. This race will be interesting to watch.

In trying to satisfy my urge to communicate through Facebook posts, I found that to no longer suffice. There seems to be so much that needs saying these days. Besides, I just can't help myself. 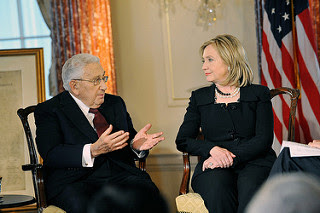 I was inspired by a Facebook meme I saw this morning depicting Hillary Clinton talking to Henry Kissinger. It was apparently a piece by Reverb Press, an online news and lifestyle magazine, entitled "Why Did a War Criminal Advise Clinton For Years?" In it, a litany of questions were asked about which of his policies she supports.

I'd like to know why is there an assumption that she supports any of them.

This publication appears to have a liberal slant, but it could have come from the other side just as easily.

"We know thanks to the posted emails from the Clinton server that she was in regular contact with Kissinger," the webzine stated, adding, "We know that she considers him a friend thanks to her review of his book last year."

The assumptions are troubling, but what really troubles me is the conclusion, "That Clinton would willingly interact with the man who engineered the genocide in Bangladesh should give us all pause."

These kinds of assumptions harm our politics, malign good people, and rev up a frenzy among unintelligent, non-thinking, reactionary masses of people who hate Hillary Clinton for whatever is their reason du jour.

Can't we just stop it? It is so frustrating to see such jump-to-conclusion journalism with nothing to back it up but assumptions. I'd personally like to see the motive behind these allegations that somehow Hillary has a mutual agreement with Henry Kissinger just because of a few past interactions. The reality is that this woman was the Secretary of State, charged with the handling of all the foreign affairs of this country. She has to interact with everyone who may provide insight, information, or informed opinion available to her. That can't be an easy task, given the climate in today's world filled with so much upheaval, particularly when it comes to the Middle East. I'm sure it is a bitter pill to take, to have to talk to people you agree or disagree with on a regular basis. But that is how it is done! Keep your friends close; your enemies closer.

Whatever happened to giving the benefit of the doubt, trusting in judgement, refusal to burn bridges, and recognizing that Regular Joe just isn't privy to all the information needed to make an informed opinion on this or any subject. The point is that to run a country, or in Clinton's case, to manage its international affairs, all the information available is not just fair game, but may be vital and necessary. To discount any one person or bit of data or factual truth is to fail. To do the best you can, which is all I believe Hillary Clinton ever did in any job she has ever or will ever hold, there can be no less.

To make a real judgement, it takes facts, as many as can be obtained, from all angles. I would expect nothing less of her than to seek out friends, enemies, and all parties involved in decision-making before a rush to judgement is ever made. Decisions must be products of calculated thought without speculation.

Regular Joe doesn't seem to get that. And stringing words together does not a journalist make. Regular Joe doesn't get that either. Too many people are believing too many things that simply aren't true based on what they read on the Internet.

I don't know if Hillary Clinton considers Henry Kissinger her friend. I really don't care. Does it really matter? As long as she is qualified and does the best job she can do, that is all that really matters. I am not in her close circle of friends. In fact, I've never met her. So I don't care about her personal life. I do care about the decisions she makes that affect the country I call home. And if Henry Kissinger can giver her insight into doing that, great! And I believe she will do the best she can to make the right decisions that are best for the U.S. of A., as I believe she has always tried to do.

Folks need to slow down and think about what they read. It seems we could all take a lesson from Hillary Clinton. Don't discount information, no matter where it comes from. And don't believe everything you see and only half of what you read.

Posted by Carol Henrichs at 11:08 AM No comments:

Even from jail Jesse Jackson, Jr. still feeds at the public trough

Former Congressman Jesse Jackson, Jr. is now serving time in prison. The $750,000 judgement against him remains unpaid, but he will still be paid public money.

Jackson, who pleaded guilty in federal court in the District of Columbia, begun serving 30 months in prison Tuesday after he pleaded guilty to conspiracy to commit false statements, mail fraud and wire fraud earlier this year. He was convicted last February for pilfering cash from his own campaign fund to support an overly lavish lifestyle, Jackson, 48, had a penchant for expensive vacations, night clubs, furs, a Rolex watch, and pricey collectibles once owned by the late Michael Jackson and other celebrities. He also spent campaign cash to remodel his house.

Despite Jackson’s fall from grace, the ex-congressman remains eligible for $8,700 per month in disability due to his mental state. He has been diagnosed with a bi-polar disorder as well as suffering from depression.

Last year, coincidentally, around the time his political star was losing its luster, Jackson disappeared from public view. When he resurfaced again in August, he announced that he had been at Mayo Clinic where he had undergone treatment for a bi-polar disorder coupled with severe depression.


As a former congressman, Jackson will also remain eligible for a partial federal pension of $45,000 annually.

Some $200,000 of the judgment against Jackson has been paid from a liquidated securities account. The remaining $550,000 must be paid before next June because according to court documents, Jackson has been “unsuccessful in his attempts to satisfy his forfeiture money judgment.”

The U.S. Marshals Service auction, of some of Jackson’s seized assets was canceled two months ago, when the authenticity of some of the items was questioned.


The remaining funds will come from the sale or refinance of the Jacksons Washington, D.C. town home. The property was on the market for a short time last year. It was listed at $2.5 million.

Jackson’s wife Sandi, a former Chicago alderman who ran her husband’s campaign office, pleaded guilty to tax fraud. She received a 12-month sentence in prison as well, but the two will not serve at the same time.

A judge granted the Jacksons’ request to allow them to serve consecutive terms in prison. Sandi Jackson will remain free until after her husband’s release from prison, so she can take care of the couple’s two children: Jessica, 13 and Jesse III, 9.

Posted by Carol Henrichs at 8:27 AM No comments: